Experiencing the Live Dealer Games at an Online Casino

The live casino games are becoming ever more popular among gamblers, and it’s mostly down to their convenience. After all, what could be better than playing games with real dealers from your own home? You might never have thought about participating in one of them before, so what can you expect if you do decide to try a few of them out? Well, the most significant difference is that you’ll be interacting with an actual person. Your identity remains anonymous at all times though, which is reassuring for some players. Most casinos will ask you to select a screen name while you play, and this should be one that’s different to your regular online user name. You’ll be using a convenient interface to make your bets just as you usually do, but you’ll be able to watch the action taking place in real time. You can even add to the atmosphere by chatting to the dealers as they’re spinning the roulette wheel or issuing the cards!

How the Live Games are Organized in an Online Casino

When you first enter the live lobby, you’ll be asked to choose your category, and then you’ll be offered a range of tables to choose from. These vary, not only by the variant of game on offer, but also by the minimum and maximum betting limits, so it’s best to choose carefully. Many venues offer exclusive tables for their members. There are often some available in different languages too, so that may be another option for you to consider. Once you’ve made your choice, you just click on it, and you’ll be taken straight to the floor of the casino. You’ll be welcomed by your screen name as you join, and then you’ll be ready to participate in the next round. If there aren’t any free seats, you will sometimes be offered the chance to bet behind. In this case, you’ll be watching as the other participants play and you can wager on their hands. There’s the live chat too, so you can engage with the other players online.

Best Online Casinos with Live Dealers
* T&C’s apply; Click on Get Your Bonus for details

The live online casinos can be placed into three distinct categories. In general terms, they are all much the same. They all feature real dealers and they broadcast the action as it happens. However, there are some differences in the way that they are structured. Once you’ve explored how they are set up, you’ll be able to decide which of them is best for you.

The Production Team Working Behind the Scenes

It may surprise you to know that there has to be a full production team in every live casino. To bring the best quality games to you, the top venues employ a camera crew, lighting and sound engineers, IT technicians, and directors. There is also a pit boss on hand, who will act as an adjudicator if there are any player disputes. Each of the dealers must have access to a monitor, so that they can keep track of the bets being placed. This will also allow them to participate in the live chat feed. There is a games control unit (GCU) attached to every table, which converts the sequences of play, such as the cards being dealt or the roulette wheel being spun, into digital information. This can then be streamed as a live feed into your home.

The Leading Games Providers for the Live Casinos

You will, naturally, find the three  best-known developers offering live games, and although they all provide high-quality products, they each bring a bit of their unique flavor to them, too. NetEnt has concentrated on developing mobile versions, whereas Playtech is able to cater for the Asian market. Microgaming has linked up with Playboy, and has bunny girl dealers at some tables. However, the biggest name of all in the field is Evolution Gaming. This award-winning company only produces live casino games, and in doing so, it has set the bar high. It has managed to develop a catalog that has the more traditional offerings that the majority of players like to see, along with a few innovative titles that allow for a bit more creative play.

Some Other Key Developers of Live Casino Games

There are a few other software developers who can be credited with introducing something new to the scene. Extreme Live Gaming is part of the Novomatic Group, and has brought elements of some of its most popular slots into the live play. Reel Roulette uses symbols from games such as Book of Ra and Dolphin’s Pearl for side bets, and in doing so, manages to blend its RNG games with the live dealer versions. Another name worthy of consideration is Ezugi, who broadcasts from studios across Europe, Asia, and Latin America. Alongside the more standard table selection, the company offers lottery-style games, such as Live Keno, and Bet on Numbers, a variant in which you attempt to select the winning combinations. A final mention must go to Vivo Gaming, who produces live versions of Sic Bo and Craps, as well as the popular Dragon Tiger. This is basically baccarat, but it is only played with two cards.

The Selection of Games at a Live Online Casino

The table versions tend to dominate in the live dealer casinos, and this is probably to be expected. It is, after all, the genre that best suits the nature of real-time play. On the whole, you’ll find that the cards games tend to have the widest selection available, and there are usually several variants of each one on offer. Roulette is also listed at the majority of venues.

Some Alternative Games at a Live Online Casino

From time to time, you might feel like stepping away from the standard games when you’re playing online and trying out something that’s a little bit different. When you do, you’ll be pleased to know that there are several live games that offer something new in terms of play. You can find versions with one host, with several hosts, as well as one that doesn’t have a dealer at all!

Slingshot RouletteAlthough Slingshot roulette is played in real-time, there isn’t an actual dealer involved. It isn’t computerized either, as there isn’t a random number generator (RNG). Instead, a compressed air machine is used to launch the ball randomly onto the automated wheel. Play is carried out at an extremely fast pace, with up to 80 games being held every hour. All of the action is streamed live, from a professional studio.

Dream Catcher by Evolution GamingDream Catcher is the live option that has been designed with fans of slots and bingo in mind. It’s a huge wheel, which is spun, and the idea is to predict which of the numbers around the edge will be at the top when it comes to a halt. The whole set-up has the feel of a game show. There’s a host on hand to oversee the proceedings, and there’s a live chat facility too, so you’ll be fully involved in the fun as you play. 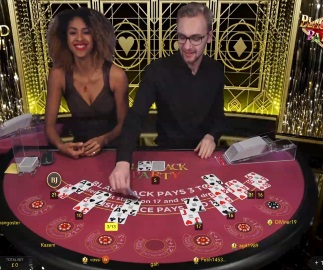 Blackjack PartyYou get two hosts when you play Blackjack Party. One is a TV trained presenter, and the other is the professional dealer. There’s a real fun atmosphere during the game with music playing in the background, and a lot of banter taking place. You’ll also have a variety of betting options as you play, with both side and insurance wagers being available, as well as the chance to double down, and to split pairs.

Participating in the Live Jackpot Games

If you like to play the big money versions when you’re online, you will still have this option in the live dealer games. Evolution Gaming has three different live dealer options that give you the chance to take part in a progressive jackpot. In each of these versions, the prize fund continues to grow until it has finally been won, and then the process will start over again. 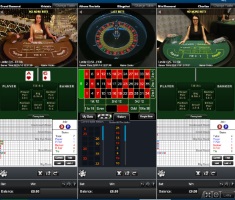 If you’re good at juggling several things at once, you might be interested in taking the multi-game option. In this scenario, you’ll be participating a number of games simultaneously, and placing bets on each one. Your computer screen will be split, and everything happens in real time. You can choose the categories, and switch to something else whenever you want, as long as there is a spare seat at the table. To do this, you just click on the change button on the top right of the screen, and select a new option. The biggest benefit of this type of play is the speed in which it all takes place. The moment that you’ve finished with one round, you’ll be moving onto another. There’s certainly not going to be any time for you to get bored!

The mobile versions of the online casinos have really taken off, and nowadays, you are able to play wherever you like. It’s good to know that this is the same when it comes to the live dealer versions. The majority of these games can be played on a number of devices, without any interruption to the streaming at all. Although the screen is a little smaller, you can still zoom in for the close-ups without any loss in quality. You’ll have all the standard options open to you, as well. You’ll be placing your bets and accessing your banking facilities as normal.

Promotions and Bonuses at Live Casinos

You’ll very often be offered a bonus when you first take part in one of the live casino games. These will function in much the same way as the regular welcome promotions, and so there will be the usual playthrough requirements. It’s also very common for promotions to be linked to one of the live dealer versions. For example, you may get a cash prize if you get a five card trick in blackjack, or you could get some additional comp points. With a few of the special deals, you have to state that you are opting in, so be aware of the terms and conditions.

There are only a couple of guidelines that you need to remember when you’re participating in a live casino. The first is to know the rules of the game that you’ve chosen. If you can, you should watch a few rounds to get familiar with everything before you join in. The second piece of advice is to make sure that you stay within your budget. It’s easy to get carried away in the moment while you’re playing in a real-time atmosphere, so be sure to set a definite limit before you log on and then keep to it. There’s nothing quite like the buzz of the live dealer versions, and for many players, it’s an experience that simply can’t be beaten. So when you fancy trying out something a little bit different, you should give one of the games a go!